It has been quite a while since I have posted something sweet, so today is the day.

About a month ago, when the weather wasn't so warm, I baked a cheesecake.  It turned out super yummy.  It made enough that I took half of it in to the office.  Even the omnivores loved it.

There are a lot of apple crisp cheesecake recipes on the net and most of them have eggs, milk, and regular cream cheese.  I adapted this recipe from one found on One Green Planet, I believe originally posted by Vegan Heartland.  I did change it up a bit, mostly by changing the base from graham wafers and cutting out the extra sugar in the base.

This is not a health food by any means, but is nice for a once yearly indulgence.  I usually do not use too many processed foods or recipes with this much sugar, so this was a rare treat for us.

I have full intentions of using this idea and changing it up into a healthy no bake version.  My plan is to get creative and use a cashew cream cheese filling and a raw nut/date base, and no refined sugars. Maybe I'll get started on that.  The out-takes until I master it should be tasty.

Note:  If you cannot find Speculoos cookies for the crust, use a vegan graham wafer, gingersnap cookie, etc.  If you use graham wafers you may want to add a little sugar to the crust mix. 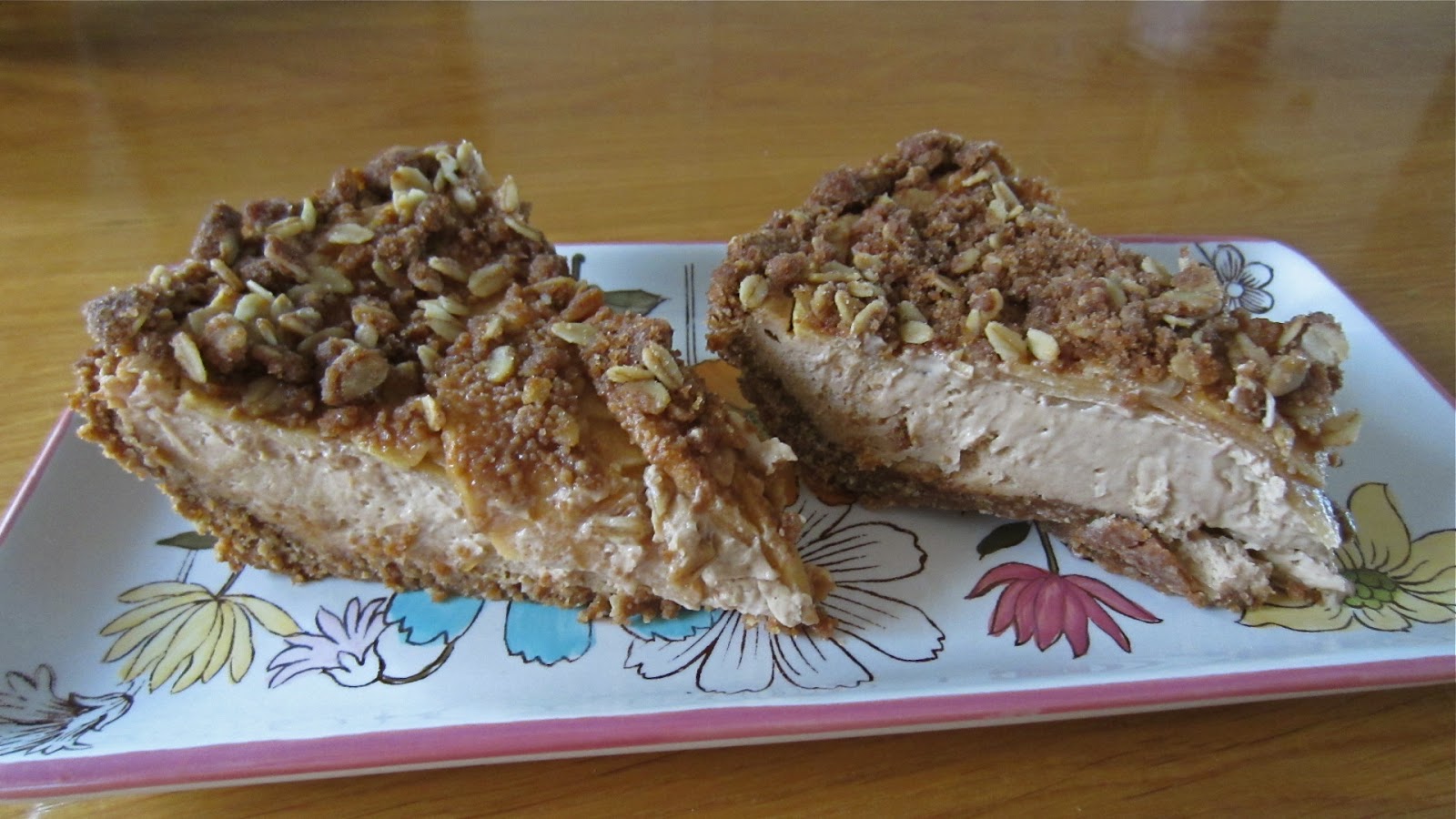 2.  Blend together the cookie crumbs and oats until fine.  Add melted margarine and mix until combined.

3.  Press the base mixture into a large glass pie dish.  Press up the sides to form a complete bottom crust.  Set aside.

5.  Pour cream cheese mixture onto base.  Feel free to take the time to lick the beaters and the bowl from mixing the filling.


6.  In one even layer, place the apple slices on top of the cheesecake mixture.


7.  For topping - in a small bowl combine oats, brown sugar, flour, and cinnamon.  Stir in melted margarine.  Sprinkle all of the topping on top of the apple slices.


8.  Bake for 40-45 minutes until topping is dark brown and the filling seems set.

Let cool, then refrigerate overnight.  You can let it chill for a few hours then eat a piece, but it won't be quite as firm as it is the next day. (We ate some after just a few hours of refrigeration - still tasty)

Warning, the apples can be a little tricky to cut through so don't worry if your slices are a little messy, just use a sharp knife. 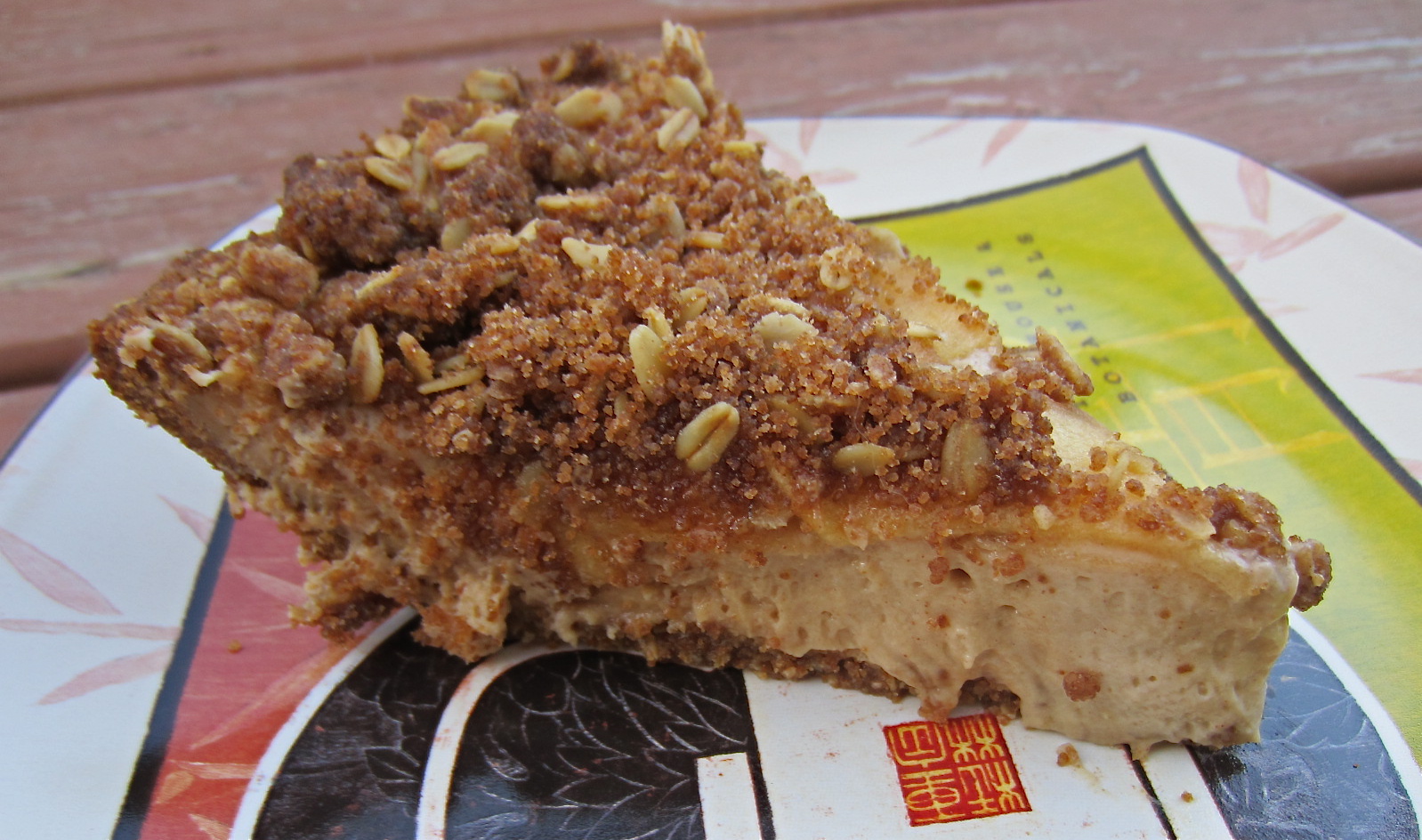 " Because you don't live near a bakery doesn't mean you have to go without cheesecake." - Hedy Lamarr
.
Posted by Trobairitz at 6:51 AM 2 comments:

While I love spaghetti, I don't love all the carbs and calories that come with traditional style spaghetti. In the winter I'll make a spaghetti sauce, then blanch zucchini noodles to go with it (see photo on blog side bar).  With our warm summer weather I decided to try something a little different this year and make a raw spaghetti sauce.  I was pleased with the way it turned out and even Troubadour said he enjoyed it.

I used my veggie spiralizer on the smallest setting and I think it would be good with it set on the ribbon setting as well - almost like a linguine noodle shape.

I didn't add any green peppers to the sauce, which I usually do when cooked.  I was worried it might over power the other flavors when raw.  Feel free to play with it a little bit.

I also topped it with raw almond parmesan.  A staple I always keep in the fridge, and make up a new batch when out.  The recipe I use is from hipsterfood.com.  The only two changes I make to the recipe are that I use less salt and use granulated garlic rather than garlic powder.  Their recipe calls for 1-2 tsp of salt and I use a 1/4 tsp maximum.  I also use the Vitamix instead of smashing it in a bag.  Here is a link to the recipe:  LINK

This recipe makes two large dinner sized portions.  We eat this as a main course without any side dishes with it. 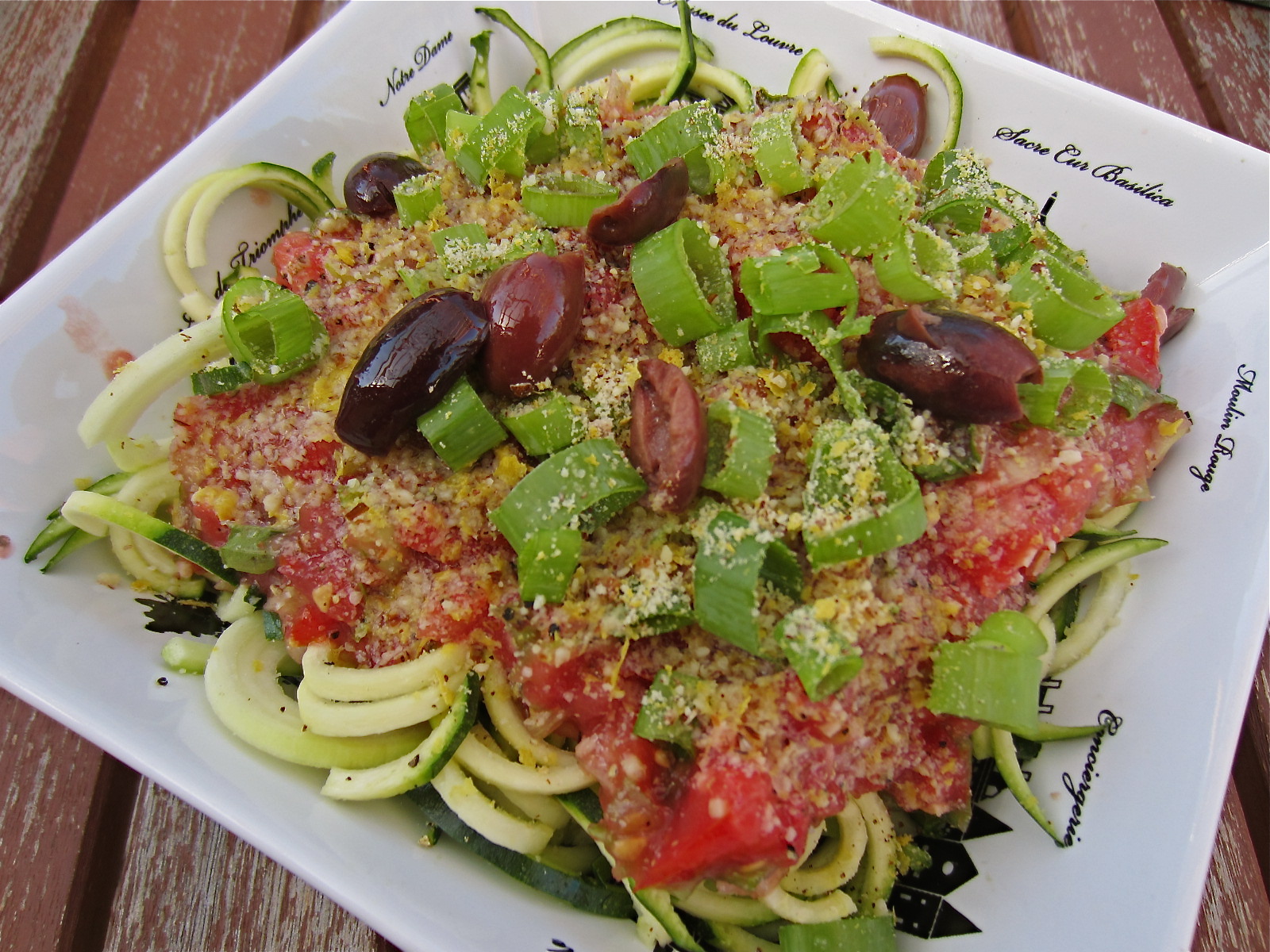 
1.  Wash and spiralize your zucchini into noodles.  Divide into portions and place in serving dishes.

2.  In a blender or food processor (I used the Vitamix) add tomatoes, garlic, basil, onions, and nutritional yeast.  Blend, or pulse, at low speed until combined, but still chunky.  Blending at a higher speed for longer will result in a thinner and almost foamy sauce.  Not good.

3.  Spoon sauce onto noodles.  Top with almond parmesan, a few black olives, and reserved onions. Sprinkle with salt and pepper if desired.  A few dried chili flakes are also good on top. 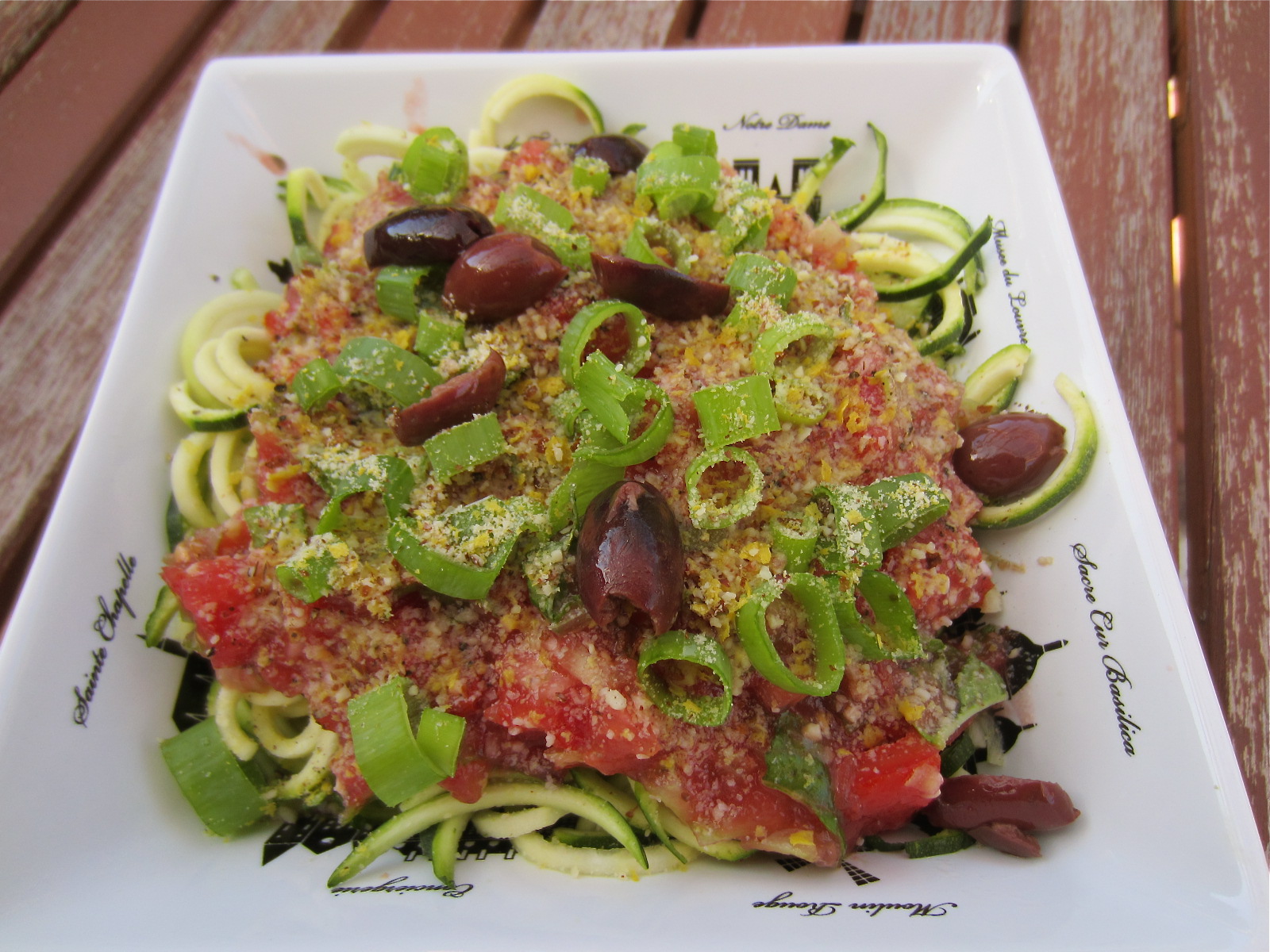 " It is difficult to think anything but pleasant thoughts when eating a homegrown tomato." - Lewis Grizzard
.
Posted by Trobairitz at 6:18 AM 2 comments:

As our weather heated up in the Willamette Valley, my thoughts turned to new recipes for salads.  I have a habit of falling into a rut where I seem to make my favorites for dinner week after week.  I've seen some recipes for cold soba noodle salad, but based on the ingredient list chose not to make it.  I finally created my own.

I used what veggies I had on hand and also topped it with some leftover grilled tofu.  I used buckwheat soba noodles that come in a 9.5 oz package.  I wanted to make enough to take for lunches the next day so I added an extra bundle of noodles from a second package to get 12 oz of dried noodles.  Feel free to use less.  My favorite noodle brand is the one I linked in the ingredients list.  It has only 3 ingredients and does not contain any sodium. 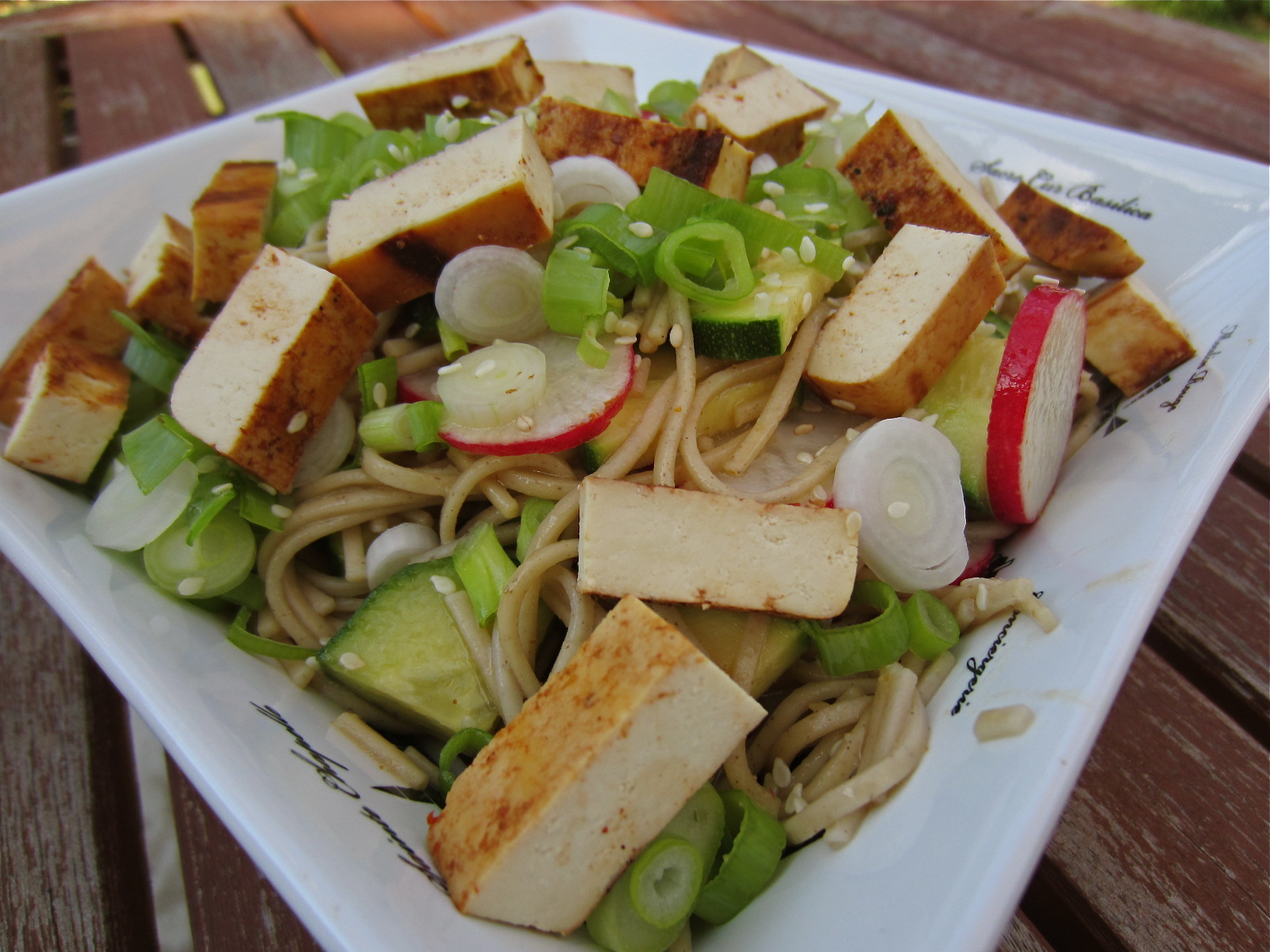 
1.  Cook soba noodles according to package directions and rinse with cold water.  They don't take long to cook, but if you want to make them up ahead of time, toss with a little sesame oil so they don't stick together.

2.  Add the sliced veggies to the noodles, reserving the green onions.  Toss to combine.  Using tongs will help to mix in the veggies.

4.  Pour dressing on noodle/veggie mixture and toss to combine.  Place on serving plates or in containers for lunch the next day.


5.  Sprinkle the salad with green onions, sesame seeds, and tofu or edamame.  Enjoy.

When I made this, I had it ready to go in the serving dishes a few minutes before Troubadour arrived home from work.  I was worried that the noodles might have absorbed the dressing so we drizzled a little extra soy sauce and rice wine vinegar over it and it was perfect. 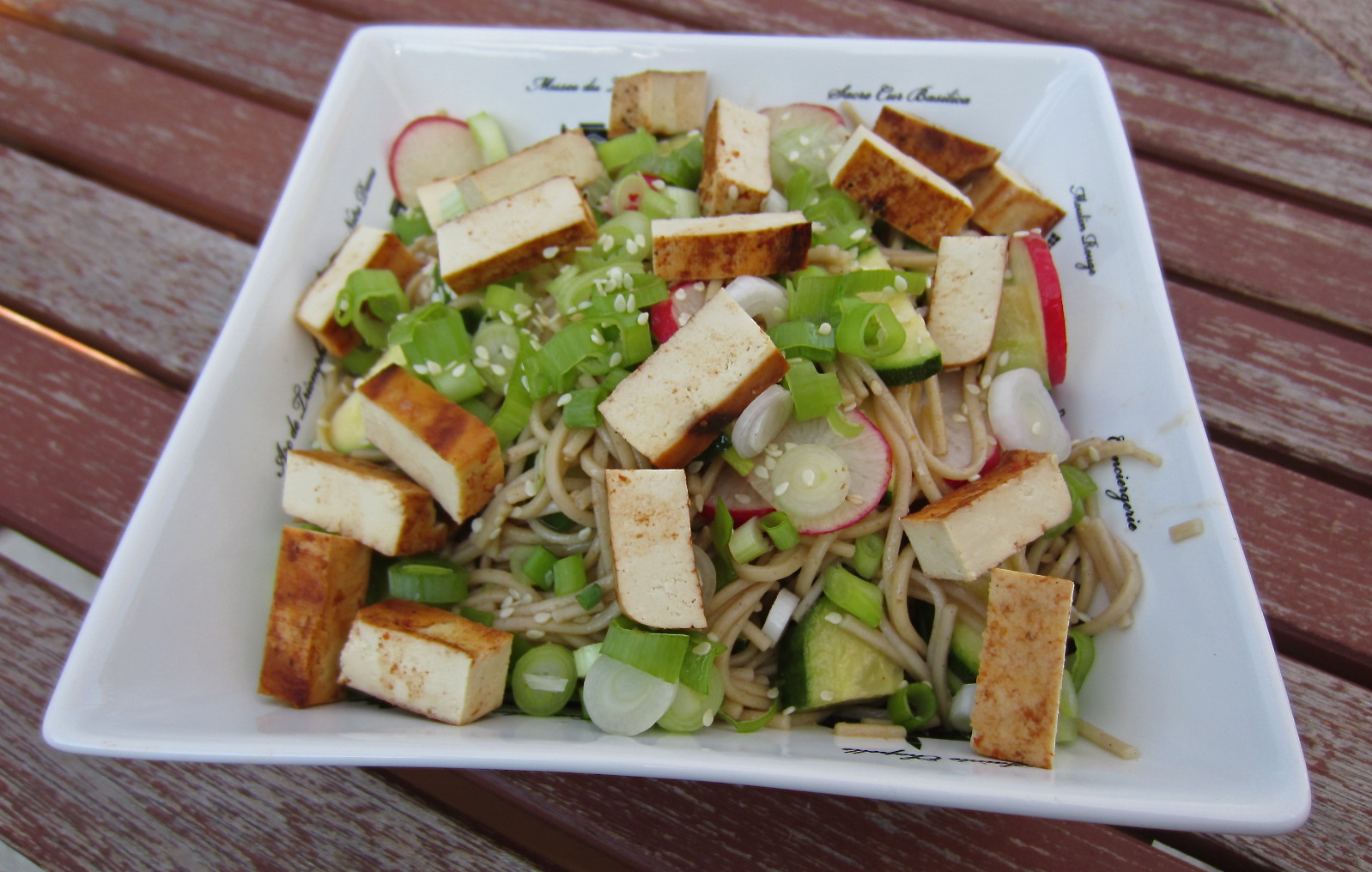 "There is a unique freshness when eating buckwheat noodles cold with plenty of herbs and citrus acidity.  I can't think of any better use of chopsticks on a hot and sweaty evening." - Yotam Ottolenghi
.
Posted by Trobairitz at 6:30 AM 6 comments: 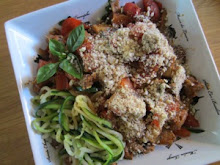